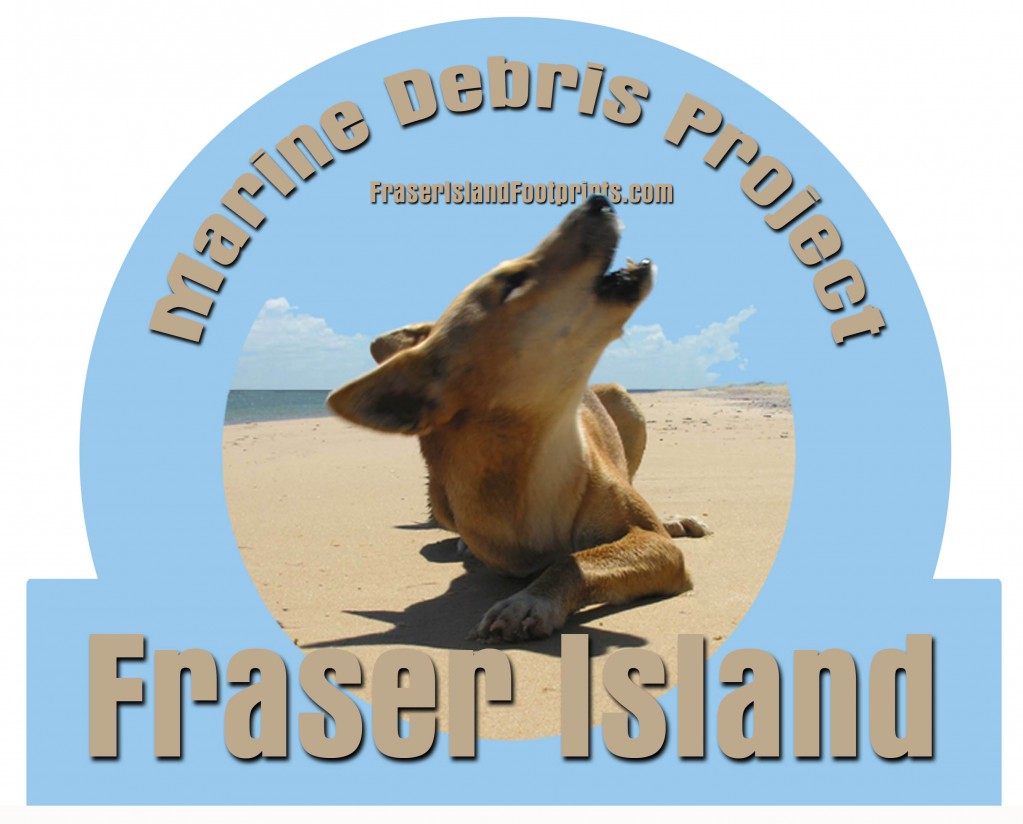 While on Fraser Island I divide my time between observing/photographing the dingoes, and picking rubbish up from the beaches. Both pursuits are my passions.

In the early days while visiting the Island, I noticed that there was a huge amount of rubbish on the beach, especially in the many creeks on the eastern side of the Island. The rubbish was literally choking these creeks which should have been pristine, especially in a World Heritage Area. Rubbish accumulates here at an incredible pace, and I was initially alarmed to note that no one was removing it. Day after day I drove past the same pieces of rubbish. Eventually, sick of seeing it, I started to clean the beach, and have been doing so nearly every day since. It has been an interesting journey and I’ve learnt a lot about the environment along the way.

The first few trips to gather rubbish from Poyungan Rocks resulted in removing 27 bags of rubbish per trip. Clearly this rubbish had been accumulating over many years. As seasons change and weather patterns vary huge seas remove tones of sand, dump rubbish, and then eventually replace all that sand again. During this process, tones of rubbish are buried. While this rubbish can’t be seen and isn’t really doing any damage to the environment, eventually it comes back to haunt us. Plastic becomes very brittle and breaks down to ultimately turn into pieces the size of confetti, and in due course microscopic dust. This confetti is very attractive to shorebirds which then ingest it. Autopsies performed on dead shorebirds have revealed as many as 35 pieces of plastic in their small stomachs. Likewise, if this plastic is allowed to return to the sea, marine mammals such as dugong, seals and dolphins accidentally swallow it, causing toxic reactions, internal injuries, and septicemia. Baleen whales when opening their enormous mouths to take in krill cannot filter it out.

While picking up rubbish I have removed hundreds of balloons from the beach and now realise that something as simple as releasing balloons into the air during a celebration can have detrimental effects on the environment. Inevitably the discarded and forgotten balloons make their way to the ocean. It’s not only the balloons themselves that instigate chaos in the ocean but also the strong curling ribbon that is usually tied to them.

While on the Island I see many turtles wash up on the beach, having died due to confusing balloons, plastic bags, or even rubber gloves with jelly fish or squid. The plastic accumulates in their digestive systems and they cannot take in life-giving food, and subsequently starve to death. Rubbish can also trigger ‘floating syndrome’, whereby debris caught in the gut prevents food from digesting. It breaks down, rots, and releases gasses into the coelomic cavity or stomach which make the turtle buoyant and it cannot dive to feed.

Turtles also get caught up in fishing line, nets and rope. One day on my way north I saw a large pile of rope, and pulled over to pick it up. My heart broke when I realised that bound within the rope was a turtle, and it was still alive. How this creature did not drown with that heavy rope binding it so cruelly was a mystery. My knife was old and rusty and the tide was rising, but there was no way I could leave the turtle in this state – and the whole pile of rope was much too heavy for me to lift onto the ute on my own. It took half an hour to cut the turtle free, but my reward was well worth it. He almost ‘flew’ out of his bondage and towards the sea, once again uninhibited. 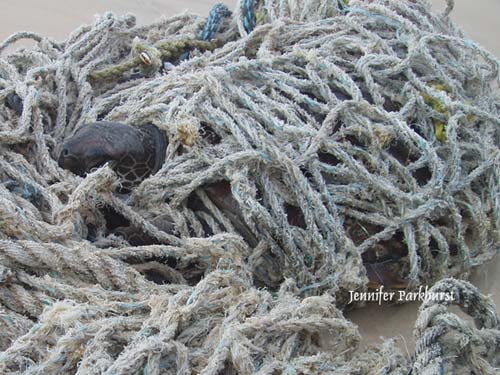 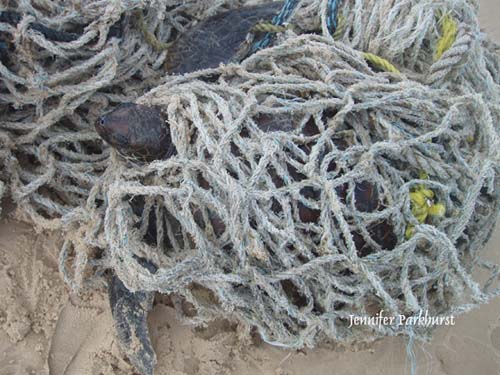 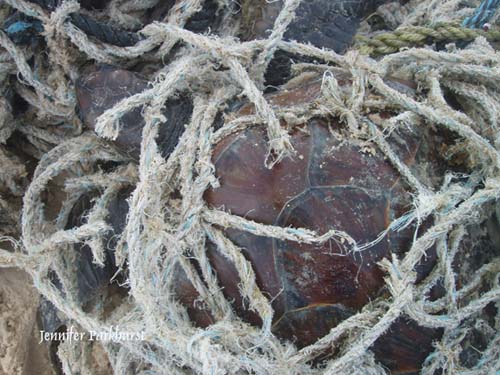 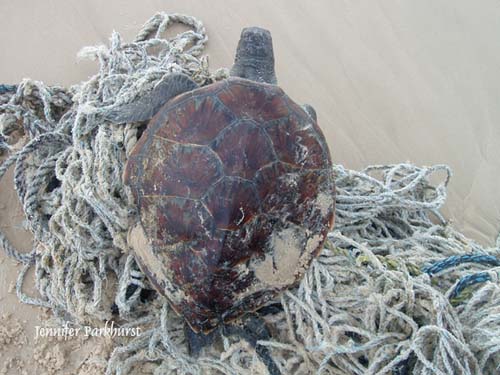 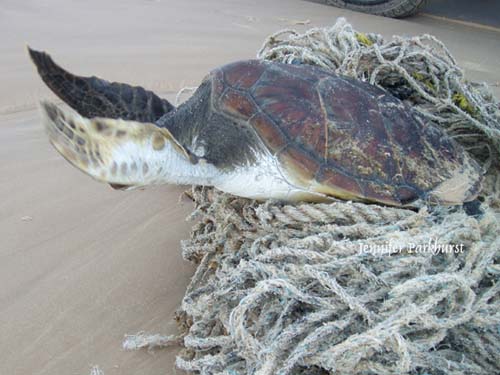 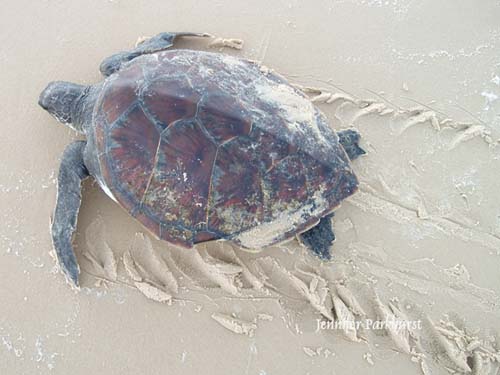 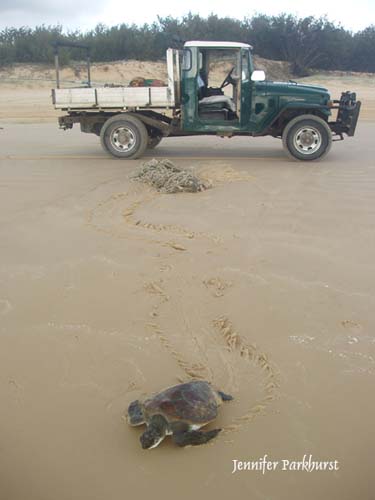 Good weather means that many fishing vessels are around, both commercial and recreational. I can tell where the commercial boats come from because of the rubbish that washes up. Certain fleets must use UHT containers of all descriptions for wine, milk, or other rations. These appear one month adorned in an Asian language for example, and the next in German. Likewise during these times enormous plastic bags wash up onto the beach and if I cannot remove them the same day they wash up, they fill with sand on the incoming tide and become impossible to remove. There is one huge black bag that has been on the beach for 7 years now and if I had the equipment I would love to dig it up.

These large trawler bags, smaller rubbish bags and even bait bags as well as being consumed by marine animals can also entangle them. Restriction of movement means animals become exhausted, drown or starve, and can result in amputation.

On average I pick up four fluoro tubes a day. Mostly they are broken or ready to break, and when do so form small invisible splinters of glass which could easily cut a child’s foot open or indeed harm a dingo or shorebird. Mariners must simply throw old fluorescent tubes overboard when finished with them. They must not realise or care that inevitably these brittle and fragile tubes get washed up on the beach.

Cyclic currents and weather conditions bring certain things onto the beaches that have been lying on the ocean floor for years. Aluminium cans surprisingly sink to the bottom, and never seem to fully disintegrate. They sit on the sea bed degrading and become razor thin and sharp, and then come up with the weed on particular currents. In fact, on one single day I picked up three bags worth of these cans along a 7 kilometre strip of beach.

I began to notice that I was finding a huge number of ‘glow sticks’ that are used by recreational fishermen. The best way to demonstrate their extent was to keep them aside in a bucket to see how many I actually did pick up in an allotted time. It only took a month to fill a standard bucket. Likewise, but more astoundingly, I began to notice that each day I was picking up around five toothbrushes, and at least 10 cigarette lighters. It intrigued me that so many toothbrushes would be floating around in the sea. Why?

After a mere four months I had a plasterer’s bucket full of cigarette lighters and toothbrushes. Surely this could illustrate to individuals that each occasion they mindlessly toss something small off a boat, into a gutter, or onto the street, it really does accumulate and generate long-term problems for our environment.
It is not only the big ugly and obvious things that are causing problems, but the little things that each individual could change given the motivation.

I have seen tourists yell at people for letting their dog defecate on the beach, and then the same people walk away leaving their picnic waste behind. I have even encountered a tourist who walked past me eating his fast-food lunch while I was picking up rubbish and then threw his lunch remains (aluminium can, plastic bag, chip packet) over his shoulder with no thought whatsoever that he might be doing anything wrong.

The strangest thing I ever collected was a toilet system – not all at once but over a week’s time and from different parts of the beach. First the cistern, a few days later the seat, and eventually the toilet brush and even its holder.

The greatest thing I found on the beach was a Tasmanian CSIRO research tag which contained valuable data thought to be lost forever. There was much excitement from the research team when I contacted them and told them their tag was safely retrieved. Once I sent it back to them they donated $250 towards the beach clean-up.

In the first two years I think I removed an average around 50 tones of rubbish per year. Mostly it was glass, plastic, rubber, foam – all the things that don’t break down. After the first intense years of cleaning up around Poyungan Rocks and down to Eurong, it has been a case of maintenance. I now usually fill between 2 – 8 large garbage bags per day, depending on my time and fuel constraints. After each collection of rubbish, I travel back to the mainland where I deposit it at the local tip.

Most people aren’t faced with seeing dead marine life on a regular basis and so it is understandable that cleaning up the beach is not a major priority in their lives. But 100,000 marine mammals and 1 million birds are killed annually by debris, and plastic makes up 60% of this rubbish. Sadly it seems that until marine rubbish and its effect on the environment begins to cost people money, nothing will change.

It is not just mariners that need to clean up their act, however: a review of marine waste management procedures would be appreciated with laws put in place enforcing tough fines for offenders caught dumping rubbish at sea, with incentives for those who do the right thing.

My beach clean-up program is self-funded and I am very happy to work as a volunteer, giving something back to the environment and the local community. Garbage bags, vehicle maintenance/registration and fuel are some of the costs incurred. I am also obligated by Queensland Parks & Wildlife Service to pay for a yearly $185 vehicle permit. Unfortunately, when I asked QPWS if they would be prepared to ‘sponsor’ my work on the island by waiving the permit fee, their response was ‘we didn’t ask you to do it’.

It is very sad that while everyone wants clean beaches and a clean safe environment for our children and marine life, few are prepared to actually do anything to make it happen, except perhaps pick up rubbish once a year on Clean up Australia Day. (Note: Clean up Australia Day people are given free vehicle permits for the Island.)

It is only thanks to the support of the Fraser Island barges, both Fraser Explorer and Manta Ray that I am able to get to the Island every day free of charge, resulting in an approximate contribution of $150 per week each towards my work there. They have been behind me every step of the way and have always appreciated having a clean beach for people to see when they first arrive at Fraser Island. My sincere thanks go to Neil Grono, Kosta Ladas, and all the lads in the crews for your generosity, courtesy and commitment to Fraser Island.

Anyone genuinely interested in receiving a free promotional DVD of my work on the Island please fill out the contact form below.