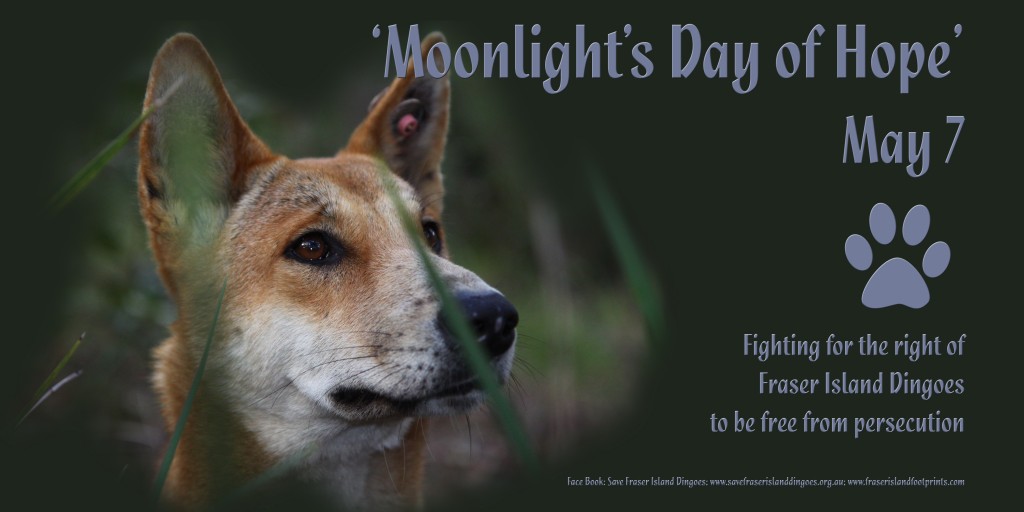 Grave concern has been expressed by members of the public and some veterinarians about the use of Valabarb as a means of euthanasing (destroying) dingoes on Fraser Island.

It is highly recommended by all vets that Zoletil (anaesthetic) be administered prior to using valabarb, as valabarb causes an excruciatingly painful death for the animal. However, Recent RTI information shows that, of the approximately 30 animals destroyed with valabarb, 9 do not appear to have received Zoletil prior to destruction. Of these, 7 were animals that Jennifer Parkhurst had observed, such as Moonlight, pictured above.

In one case an animal was injected 4 times in the intracardiac region (heart) before it eventually died.

At this stage we have not been able to gain access to any protocol documents from the Department, nor have we been able to discover if any were submitted.

The circumstances of this case indicate a need for a critical review of the capture and restraint procedures for dingoes. This case also highlights the desirability of appropriately administered chemical restrains and close monitoring of vital signs (particularly rectal temperature), preferably by experienced veterinary personnel. This is a preventable occurrence with proper procedures and appropriate monitoring.’

The necropsy report for this juvenile male dingo reads like a horror story.  Upon examination of this document, veterinarian and animal ethics expert of more than 40 years experience in animal welfare, Dr Ian Gunn said:

‘In all my years as a veterinary surgeon, I have never witnessed anything like this. This animal died in agony while trapped and restrained as part of ‘research’ being conducted by Queensland government authorities charged with its protection.’

The necropsy report stated that the otherwise healthy dingo had been restrained for ‘some period of time’. It had been pinned down by a pole noose and pinning device. It had chipped and fractured teeth, extensive internal bleeding, including extensive bruising and haemorrhaging to the thorax, limbs, neck and lumbar spine region, bleeding from the eye, tearing of the muscles between the ribs and the chest wall, and congested and collapsed lungs. In its final moments of life, the dingo vomited its stomach contents into its airways.

A full investigation apparently took place and it was found that there was no case to answer with regards to animal cruelty. They also indicated that this was an isolated case and had not occurred before. But how would we know? There are thousands of necropsy reports yet to go through.

Deficient record keeping means that no such data is available for scrutiny. Necropsies have now been outsourced to independent veterinarians, due to pressure applied by Save Fraser Island Dingoes Inc.

Nothing short of a full, independent investigation of the circumstances surrounding this cruel death is required, with a view to criminal charges being laid under prevention of cruelty to animals legislation.

The following photos included in the necropsy report, while disturbing, show that at the time of its death this dingo died in agony. Photos from Necropsy report.

Please leave your comments below as a message to all concerned that you do not think this is appropriate treatment of a World heritage Iconic animal. Like ‘Oscar’s Law’, ‘Moonlight’s Day of Hope’ should be a tribute to all of the Fraser Island dingoes that have needlessly suffered agonising deaths.

2 Responses to Moonlight’s Day of Hope