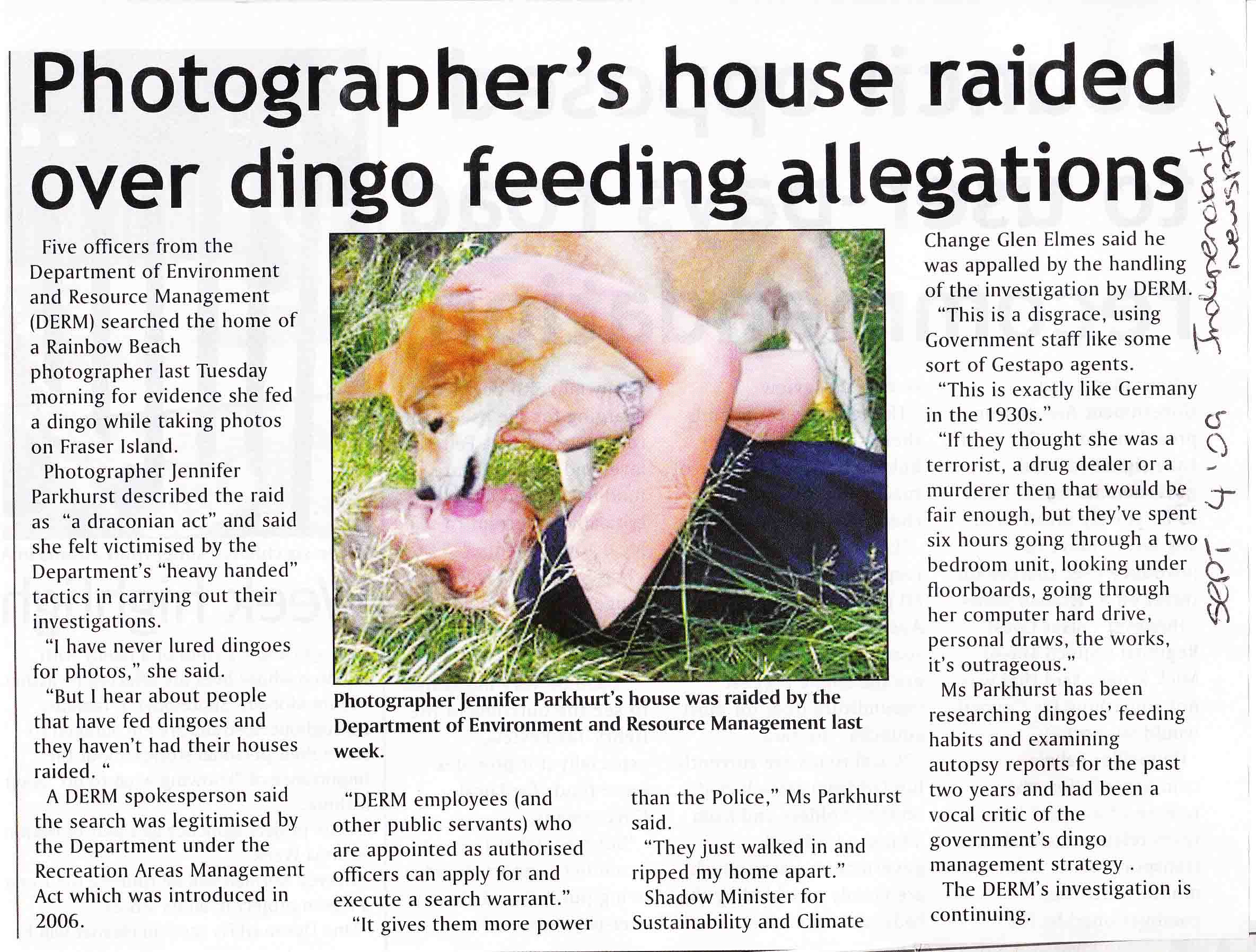 On August 25 2009 at 7am I was awakened by a knock at my front door and greeted by five Department of Environment and Resource Management (DERM) officers with a search warrant, accompanied by a police officer. 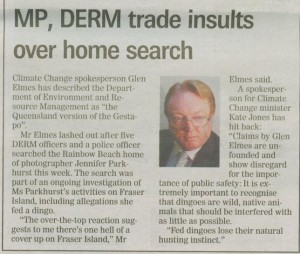 They were looking for evidence that I had committed crimes against the Recreation Areas Management Act 2006, on Fraser Island, while operating under a Commercial Activity Permit for filming/photography. (The alleged crimes are discussed below.) The five officers spent six hours in my two bedroom unit and removed absolutely everything in my home that had to do with dingoes, dogs, photography, and computers. This includes the entirety of my last seven years’ voluntary work on Fraser Island, photographing and observing the dingoes and collecting marine debris (rubbish). They took my external hard drives, my back-up drives, and my catalogues of same. This included 19 hard drives comprising 17 terabytes of data. 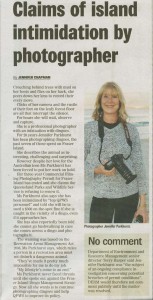 As well as photos the hard drives also contained extensive field notes of every day I spent on the Island observing the wild dingoes, and all my personal journals.

They also contained photographs dating back to my childhood which I had digitized, personal letters to my (now deceased) mother, letters to friends, e-mails, and the original notes and manuscript for the book which I have been working on for the last several years, and all the photos for the book, which was just about to be published, leaving me without a copy.

They took many things unrelated to my alleged crime: personal birthday cards with dingoes on them; photographs taken at dingo sanctuaries; DVD’s clearly marked ‘dingo sanctuary’ and DVD’s of my beloved deceased K9 dog. They took my GPS, my rubbish collection (marine debris) log book, as well as photographs of dingoes from my walls; and they photographed the paintings I had done of dingoes, and took close-ups of my signature on the bottom of the paintings. Fund-raising items belonging to Save Fraser Island Dingoes Inc (SFID) were confiscated, such as a kiddies t-shirt with ‘save the dingo’ printed on it, fridge magnets with ‘save the dingo’ printed on them, bookmarks, and a wall poster with ‘save the dingoes’ printed on it.

The agenda: to rid the Island of one of its most vocal dingo management strategy protesters. 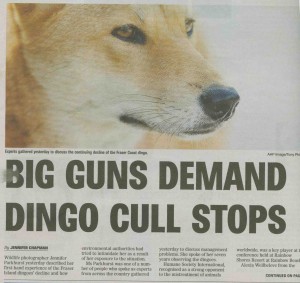 In some of the articles I have published and in radio interviews, I referred to my work as ‘research’. According to DERM, under the RAM Act section 112, it is an offence to call oneself a researcher without being affiliated with a university and without being a ‘research permit’ holder.Apparently the penalty for this under legislation can be up to two years imprisonment. This section 112 was in part the grounds for the Search Warrant being granted. No charges have been laid with regards to this alleged offence. 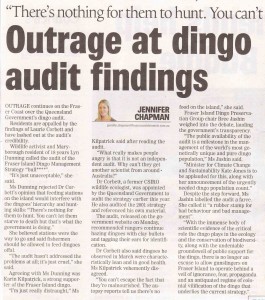 Conversely, researchers on Fraser Island are not allowed to use photographs obtained during the course of their research commercially, yet those that have done so, have not been raided, nor to my knowledge have they been fined for publishing their photographs, which likewise did not feature the government logo. 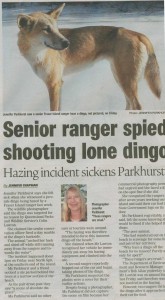 While on Fraser Island I have devoted a great deal of time to picking up and removing the tones of rubbish that washes up on the beach, all on a voluntary basis and have done this for many years and at my own expense, removing approximately 50 tones per year. Because I always returned from my Island trips with a ute load of rubbish, the barge operators gave me free access to the Island. 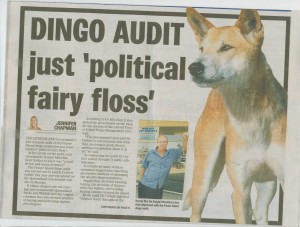 When the local paper ran a story with regards to the marine debris project, and used the Govt logo in the story, DERM then rang the administrator of one particular marine debris project and asked whether we had permission to 1/ clean the beach (I find this bizarre) and 2/ use the government logo.

So on one hand I was apparently being prosecuted for not using the Govt logo and on the other hand my colleagues were being questioned for using the logo.

During the raid they removed the original marine debris collection note book containing the fuel receipts, dates of collections, and data counts.

Why would DERM remove evidence that I care about the environment, make the Island more attractive for tourists, and safer for marine life?

DERM has now asked the barge operators to start charging me for my trips to the Island. One of barge operators felt they had no choice but to comply, even though it is not DERM’s concern. The other operator continued to give me the courtesy lift up until last week –August 18 2010 – (thank you Kingfisher barges), when they were suddenly forced to desist. 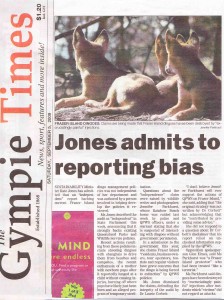 Locals, who I suspect were members of DERM, then put a derogatory and slanderous flyer around town claiming that I manipulated this whole scenario to gain publicity for the sales of my upcoming book. Notwithstanding the horror of the raid, I don’t know anyone clever enough to organize such a fiasco, nor to want such a terrible invasion of their private space in order to get some publicity. And as a result of the raid, my publisher pulled out of the contract. 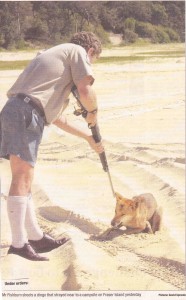 I have also been accused of ‘disturbing’ the dingoes.

I dare say that rangers hazing dingoes away from natural food sources and their territorial boundary (the beach) after 5am and before 5pm, is disturbance. Dingoes can’t read the management strategy or understand that they are not allowed to patrol their territories as per tidal fluctuations, but are supposed to do so by a human clock.

I suspect that tagging, trapping, and destroying animals are acts of disturbance. Tagging a juvenile dingo so that its ear droops and it is unable to hunt appropriately, is not only disturbance, it is cruel. Letting starving, skeletal animals roam listlessly looking for food is cruel.

I have also been charged with ‘interfering with a natural resource’.

I feel that performing hazard reduction burns during puppy season would be considered ‘disturbing’ and ‘interfering’ by burning up the adults’ food source.

An out-of-control hazard reduction burn on Fraser Island raged for 10 days last year, wiping out 22% of the Island. 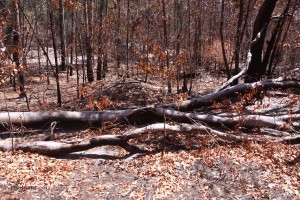 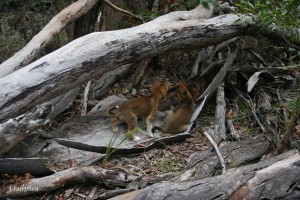 When a fire burns in a southerly direction, from one side of the Island to the other, towards the beach, there is little chance for the dingoes and their new pups get away. Or for the rest of the animals get away. None of the animals ended up on the beach, and no carcasses were found after the burn, such was the heat it generated. One of the dingo’s main food sources, especially at puppy time, is an echidna. How does an echidna outrun such a fire, or dig deep enough to avoid it?

University students put tracking collars or aversive conditioning collars on the dingoes to study their movements in the name of science. Aversive conditioning has been proven not to work, and a recent study by Dr Nick Branson, behavioral scientist from Deakin University has found that: ‘The dog becomes fearful and in some cases it can be catastrophic, because it is unable to associate what behavior is causing them to get the shock’. And yet these trials continue with dingoes on Fraser Island. Research permits and scientific credentials do not help the dingoes understand the reason for the pain, interference and disturbance to their lives.

I find it bizarre that our legal system finds it is a justifiable use of resources for a Government department to spend so much time and money stalking, harassing, and observing a lone female individual, and then spend six hours raiding my home, on the basis that I allegedly fed a starving animal.

DERM is selective about who it enforces the law upon. Many Island locals have fed the dingoes for years (and continue to do so to this day), and spend time with them; some rangers even used to have dingoes living under their huts, and the dingoes preferred to whelp their pups within the safety of human buildings rather than out in the bush. Island dingoes are not wolves; they are not completely wild; they have always enjoyed a symbiotic relationship with people.

Yet these people have not been raided or fined. Neither did they speak up loudly about the government dingo management strategy.

Do I deserve to have been raided, and have the last seven years of my life taken away? These actions seem deplorable to any ‘normal’ person I talk to. These actions are a violation of basic human rights to freedom of speech, and make a mockery of democracy. 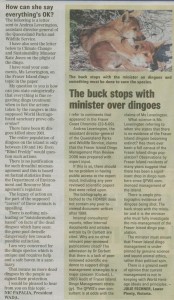 Should the thousands of supporters out there all expect their homes to be raided as well? My friends are all concerned that DERM now has copies of their correspondence to me. They wonder if they are about to be raided too.

I AM NOT A TERRORIST; I am not manufacturing or distributing drugs; I am not loitering at the primary school trying to lure kids with pornographic intent; I didn’t plan to become an activist. I merely saw an injustice being done to an animal and could not stay quiet.

A High Court of Australia decision in another case found that it was unfair of the law to place the entire burden of educating the community on the shoulders of one person. I would rather not have been raided, and I would rather not be facing jail, but I gladly shoulder the burden this government has placed on me if it means that the community in general is educated about the cruel plight of our very precious Fraser Island Dingoes.

History shows us that human progress can only be made when somebody suffers for that which is true and right.

Thank you everyone for all of your supportive comments.

I have received a few offers from people to donate towards the fine I received.

If anyone is interested in donating, you can take a cheque to your local Magistrates court and pay them at the counter. Payee is ‘State Penalties Enforcement Registry’ and my Party ID is: 62883053. Please be sure to get a receipt, and if you would be so kind as to post me a copy of the receipt for my records, I would be most grateful.

Mail can be sent to me C/O Save Fraser Island Dingoes: 50 Old Maryborough Rd Pialba Qld 4655

72 Responses to RAID on Jennifer Parkhurst