Working Together to Raise Awareness

Dingoes are not the frenzied, child-killing creatures they are made out to be. Like any wild animal, they are unpredictable; but attacks on people are rare. Dingoes have a long history of companionship with people. In some special places in Australia, people can interact with and even pat dingoes, and learn more about their role as Australia’s top-end carnivore predator. 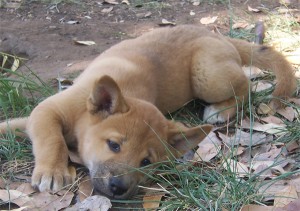 Please note that the photos on this page are not from Fraser Island; the dingoes in the photos were hand raised. Most of these photos are taken either at Durong Dingo Sanctuary Qld, Ryhorchuk property in Victoria, or at Mt Hart wilderness lodge in the Kimberley, WA. 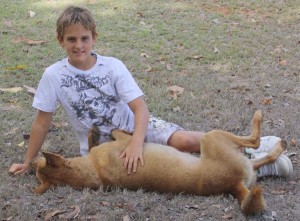 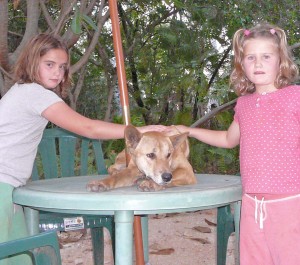 Kim and Taffy who run the lodge have found that kids who visit are much harder to ‘control’ than the local dingoes are. Easily excitable, energetic kids (used to their own pet dogs at home) often  see one of the dingoes lying around the garden, get all excited and run straight at it. As we know an animal in the wild would view this kind of behaviour from another animal as a threat or an attack. However the resident dingoes have been brought up with tourists of all ages, and really love kids, so they are tolerant of this kind of behaviour and are very patient with the children who visit.

These dingoes, which were hand raised by Kim and Taffy from pups, occasionally mix with the wild dingoes at different times of the year – especially during mating season. Dingoes are very territorial and the hand raised dingoes have claimed the country around the homesteads, airstrip, campground and gardens as their own, and defend it from the ‘wild’ dingoes in the area. 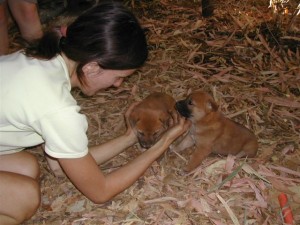 This is another example of how maintaining a stable dingo population as guard animals around a station controls dingo population better than a baiting program does. If the local dingo group understands it is not to attack the stock (and research shows us that stock makes up a very small percentage of a dingo’s diet when it is in a stable pack), it then evicts rogue dingoes coming in from other areas, and the stock remains safe. 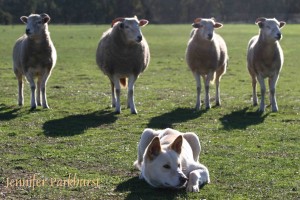 Unfortunately these days sightings of dingoes outside the wilderness area of Mt Hart are few and far between, due to baiting programs in the region on the cattle stations. 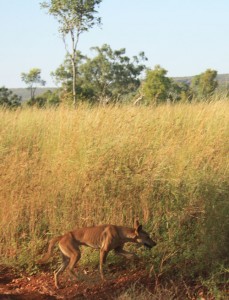 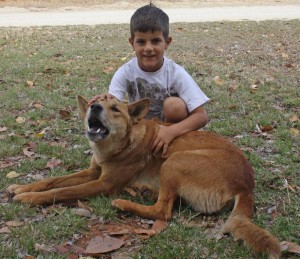 Durong Dingo Sanctuary is also located in the heart of cattle country, in South East Queensland. It is the first fully approved Sanctuary of its kind in Queensland. The owner operator, Dingo Simon is in the process of being licensed to breed pure dingoes for zoos and other sanctuaries. Because of the sanctuary’s location Simon is being persecuted by locals and the media who claim that having dingoes in the middle of cattle country is akin to having a brothel in the middle of a school area! 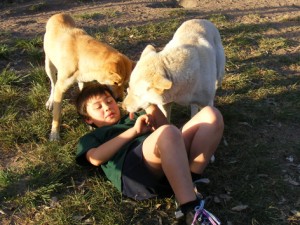 Due to all the negative media attention one of Simon’s dingoes, Wongee was recently poisoned and died as a result. Wongee, a rare, pure white male dingo was a very gentle dingo and loved children. Because of Wongee’s death, Simon will now not be able to breed dingoes for at least another two years. 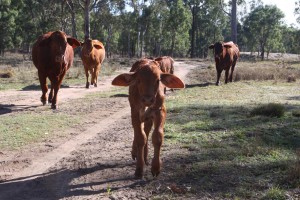 The irony of this negative media campaign is that Simon’s dingoes are housed in very secure enclosures located right in the middle of his own cattle stud. 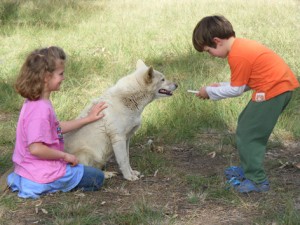 Wongee was always patient with kids

Likewise the Ryhorchuk property in Violet Town in Victoria’s high country is also situated right in the middle of a farming region, and the dingoes are kept within the boundary of a sheep stud. Gill and Richard have found that when the sheep are lambing they bring their lambs up to the dingo enclosures to assure their safety from feral foxes. In an experiment, Gill and Richard began walking their dingoes around the border of their property and encouraging them to scent mark the territory. In this way they have completely eradicated foxes from their area. Surrounding properties now request buckets of dingo scat to control pest animals on their land. 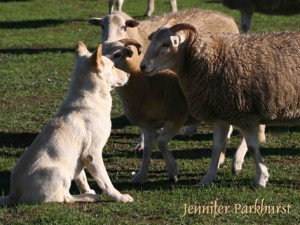 Dingoes can be trained to guard sheep 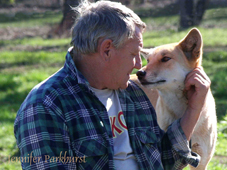 At Mt Hart, the cattle continually move throughout the dingoes’ territory in the surrounding bushland, around the homesteads, gardens and campsite. The dingoes lie in the middle of a group of cows, often with newborn calves, and do not try to ‘attack’ them. The dingoes see Kim and Taffy kill the cattle for meat, hang it, cut it up and feed them – but they do not try and ‘attack’ or bring down any of the cows or calves. 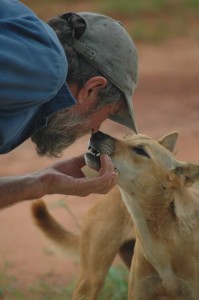 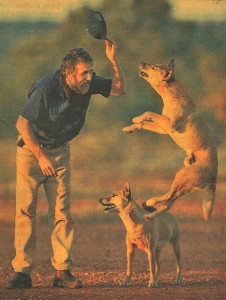 The Mt Hart dingoes will not attack a group of cows & bulls on their own due the cattle’s horns, hooves and sheer size. The dingoes wait for Kim and Taffy to shoot a beast before they move in. This behaviour has not been taught, but is instinctual – Kim and Taffy have never had to chastise or punish them for threatening, damaging or bringing down any of the stock. 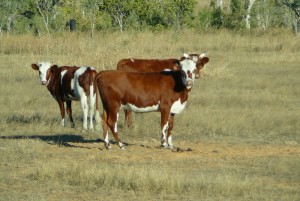 In areas of the Kimberley that are baited with 1080 the Ag Department has reported a huge escalation in the numbers of feral pigs. Local dingoes will not bring down a fully grown feral pig, but they will kill young feral piglets. The numbers of feral pigs are seriously building up around one of the neighbouring stations to the North that uses 1080 baiting to control dingoes. The pigs are moving further and further down from this baited region following the Isdell River each year (as their numbers increase to find new territory) and over the last three years groups of feral pigs have been sighted in the Mt Hart region for the first time in 20 years. Simon being viciously attacked from behind

Conservation groups and scientists are finding that by not using 1080 baiting programs to control dingo populations, the feral cats, foxes, pigs, and rabbits have decreased, and the native fauna (including rare species of bird life) has increased.[i] 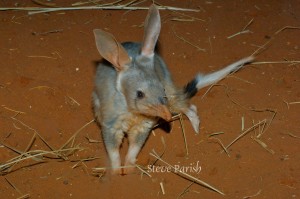 The Western Australian Dingo Association (see Link on sidebar) is currently lobbying for an end to the use of 1080 bait. The poison can take many days to kill an animal and its death is excruciating. Nic Papalia, President of the association says: ‘These ‘Lion Kings ‘ hold our ecosystem together as our top land predator. It is hypocritical of our politicians to exterminate the dingo and then condemn the Japanese whaling – at least they eat the whale meat. We just kill dingoes and let them rot. ‘The dingo is entrenched in aboriginal folklore and a totem spirit in many parts of Australia. It is an icon of Australian heritage.

’The wild dingo, far from being an aggressive animal towards man is, on the contrary naturally shy and reserved. In captive conditions the extremely intelligent dingo is fully capable of being trained to be a companion to man. Dingoes will not attack humans unprovoked. Documented and authenticated serious dingo interactions are extremely rare – less than five in our history, yet each year dogs attack 10,000 to 15,000 humans.’ 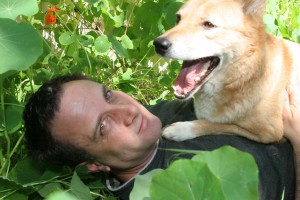 The WA Dingo Association is dedicated to the conservation and protection of Dingoes in the wild and in human cohabitation – with all areas of care and related issues connecting to the Dingo being their prime concern. 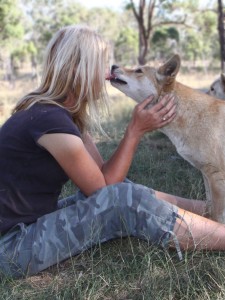 Kim and Taffy have managed to successfully combine tourism and dingo conservation for over 20 years. But at times it has definitely not been easy, primarily due to media exaggeration and hype about the dingo. It is amazing how over the years media reports about Fraser Island have instilled fear in the masses towards the dingo, and seriously affected the mindset of people and environment departments, even thousands of kilometres away in WA. Thank you to all the organisations and individuals who are working hard to educate the Aussie public about the true character and role of the dingo in Australia, as a top-order predator, trophic regulator, an animal with cultural and tourism value, and a loyal and affectionate companion.

‘Jen – Here’s wishing you all the best with your future campaigns from us at Mt Hart – keep up the good work, and keep believing so strongly in the dingo!’

[i] For new research on the topic of stable dingo pack protecting native fauna, see: Wallach, Ritchie, Read and O’Neill:More than Mere Numbers: The Impact of Lethal Control on the Social Stablitiy of a Top-Order Predator. http://www.plosone.org/article/info%3Adoi%2F10.1371%2Fjournal.pone.0006861

Also see ‘Living with the Dingo’ by Adam O’Neill Jen with Wongee and Honey

9 Responses to Working Together to Raise Awareness